AUT has retained its position in the top 300 universities worldwide and as the #3 ranked university in New Zealand according to The Times Higher Education World University rankings released in London this week.

Luke Patterson, Acting Assistant Vice Chancellor Strategy, Students and Marketing, said while university rankings don’t drive our behaviour as a university, “we know they are an important factor for potential students when they make decisions on their academic futures.  AUT’s rise in the world rankings over the years is both impressive and valuable to the university and is relevant now more than ever in a COVID-19 world.”

AUT is the only NZ university to have improved its world university rankings year on year compared to other universities.  This is particularly remarkable given AUT was not even ranked before 2014. 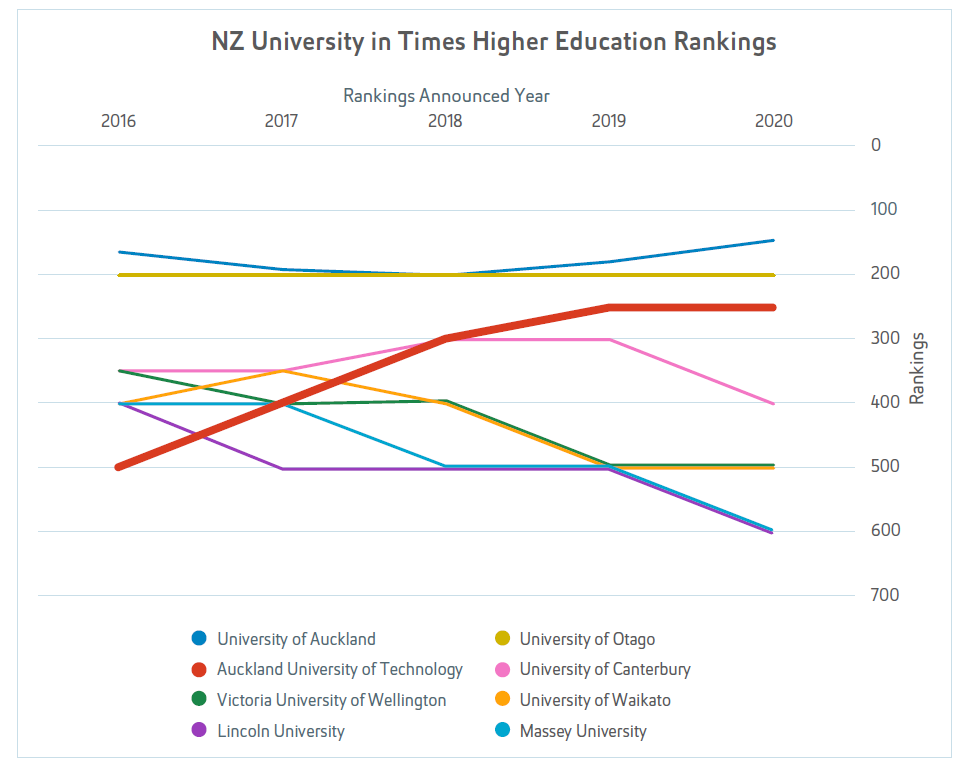 This overall world ranking sits alongside AUT’s ranking of #41 amongst the world’s universities under 50 years old, announced by THE in June.

AUT is now ranked #19 for Citations, up 13 places on last year.  The ranking on International Outlook remains steady.

For further information on AUT’s rankings, visit the  World Rankings page on the AUT website or visit THE Higher Education announcement for the full list of world rankings

Hilary Timmins graced our television screens for decades before relocating to London where she was so inspired by high achieving Kiwi ex-pats she created an award-winning documentary series.

In 2011 former television presenter Hilary Timmins moved to Britain to be with her partner, executive film producer Robert Whitehouse. “It was a tough decision to leave New Zealand and particularly courageous of my son Callum who has since gone on to graduate university and works in a music studio here. We go home to New Zealand as often as we can and fortunately I was there earlier this year,” she says.

A Seed Is Planted

It was during UK fundraising events for the Christchurch earthquake that a seed was planted. “I began meeting amazing Kiwis doing extraordinary things,” Hilary says. “I thought their stories made a great career motivational tool but it wasn’t until I was talking to Kent Gardner — a businessman and philanthropist — who also thought the stories should be told that an idea solidified. Kent and Rob were incredibly supportive of the idea for Dream Catchers, without them it wouldn’t have happened. Raising funding was a mission. I couldn’t get the TV channels interested to facilitate NZ On Air funding and kept hitting dead ends with corporate sponsorship. It was Kent and Rob who kept telling me, ‘You can do this’.”

Funding came through private sponsorship and charitable grants from the New Zealand Society UK and NZUK Link. Kea, the global network for New Zealanders were also supportive with contacts and promotion.

“Dream Catchers is designed to be a gift to young people, to help them move forward to fulfilling their dreams.”

“Some of the biggest corporates in the world are based in the UK and have Kiwi CEOs –  Dame Judith Mayhew Jonas was the first woman to lead the City of London in its thousand-year history, Mark Wilson was CEO of insurance giant AVIVA and Josh Bayliss is CEO of Richard Branson’s Virgin,” says Hilary. “I think Dream Catchers is an opportunity to lift our contemporary career heroes up and highlight the qualities that make Kiwis different. We’re problem solvers, don’t tell us we can’t do something because we’ll find a way to make it work. Perseverance, tenacity and not giving up are part of who we are.”

Hilary also wanted to show that failure can be one of your biggest successes. “The career journey often sees us wanting to do one thing at 18 but by 25 we might pivot, we don’t have careers for life anymore – we have stepping stones – nothing is wasted,” she says.

Last year Hilary was delighted to be the recipient of The British prime minister’s Points Of Light award which acknowledges people doing outstanding work in their community. “It was lovely for both the series, the people who gave me the privilege of telling their stories and a credit to Kent Gardner and Paul Gough, the two individuals who provided the largest amount of funding. They both come from humble backgrounds and believe you can do anything but sometimes you need a key to unlock the possibilities,” she says.

“Your ‘Dream Catchers’ project is an innovative way of showcasing the success of New Zealanders across the globe. You should be very proud of your work to inspire and educate others through storytelling and I wish you every success as the project progresses.”

The series has since screened on TVNZ1 and Hilary’s vision for Dream Catchers to be accessible to schools and young people has now become a reality through their educational partnership with CATE ( Careers and Transition Education NZ) “The stories are relateable because they are about New Zealanders,” she says.

Dream Catchers is available to watch and inspire all New Zealanders at dreamcatchers.kiwi

The 2020 40 Under 40 have officially been announced and we are thrilled to be able to showcase 40 of our inspiring young alumni who continue to shine in both their professional and personal lives. For more information and some video interviews please see the 40 Under 40:2020 information on our website

If you are a student, recent graduate or alumni you may be interested in the very first 40 Under 40 event here on campus. On Monday 23 November, the ‘Accelerate Your Career’ event will bring together this year’s inductees, honourees from the past three years of the programme and current students. It aims to celebrate success and provide opportunities for students and alumni to mix and mingle and gain important career insights on navigating the ‘new normal’. The 40 Under 40 event will feature a panel discussion with three of this year’s 40 Under 40 followed by breakout sessions headlined by 40Under40 past and present.

Our students arrive at AUT with so much potential. It’s our job to help them unlock that potential and use it to find the greatness within them. For many of our graduates, it was an influential lecturer, a conversation with a student mentor, or an educational experience inside or outside the classroom that gave them clarity and opened up new possibilities. Some of our great graduates now share their stories of how their time at AUT helped them uncover what drives them and inspired them to turn that passion into something rewarding and meaningful. 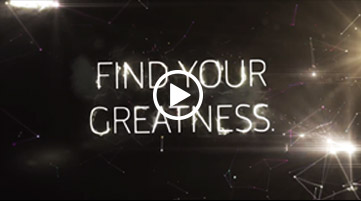 Around the globe, our remarkable and influential alumni are making an impact on their communities, countries and professions. Here are a few of their inspiring stories, with more exciting news and profiles to come.  Click here to see inspiring AUT graduate stories in a whole range of fields.

We are very excited to formally release the first step in our Outreach initiative. In what has been a challenging year which has exacerbated educational inequalities, we hope that this publication inspires our diverse rangatahi – especially those from low decile or low socioeconomic backgrounds.

In producing Outreach, we were lucky enough to speak to the Chief Justice of the Supreme Court Dame Helen Winkelmann and the President of the New Zealand Law Society Tiana Epati, as well as a range of high-achieving wāhine from Auckland Law School who attended decile 1-4 high schools. We are immensely grateful to all of our contributors for their insights.

Women in Law stands in solidarity with those who have been disproportionately impacted by the COVID-19 pandemic and strongly believes in the importance of a diverse legal profession which can serve people from all walks of life. We hope this publication illustrates that there is a place for you at law school and the legal profession, and that you have the potential to make truly impactful change.

Link to view the magazine hear and read some inspiring stories by women in law: https://bit.ly/3dHcmbE

Each year, engineering students in their final year of study at the University of Canterbury (UC) work on projects with industry or communities to address real world issues.

Below are four examples of 2020 projects students completed – simultaneously making a difference in the world and gaining experience to prepare for the workforce.

Electrical & Computer Engineering
Red Cross needed a solution for a portable energy device that could be put in a backpack and walked up a hill in an emergency situation.

Chemical & Process Engineering
A remote village in Tonga needs clean drinking water but there is limited electricity to run a processing plant. The team needed to create an economically viable plan for a small-scale plant to desalinate and sterilise drinking water. It needed to be powered by renewable resources since the village only has electricity for two hours each day and diesel is expensive.

Computer Science & Software Engineering
In collaboration with AgResearch, Port of Tauranga and Better Border Biosecurity, this project looked at how to use technology to identify contaminants on container ships and reduce the entry and establishment of new plant pests and diseases in New Zealand.

Mechanical Engineering
The goal for this project was to create a heat treatment process that would allow for the redevelopment of a bronze alloy known as C969.

See more about studying Engineering at the University of Canterbury>

University of Canterbury Bachelor of Health Science students, majoring in Health Education, took their learning to the community recently – helping to embed wellbeing in schools.

This video highlights their visit to Ilam School, where they applied wellbeing theory into younger students’ everyday lives.

Find out more about the degree programme here>

Bedggood is in the final year of his Bachelor of Music degree with a double major in performance (violin) and composition and will continue studying Honours at UC next year.

Listen to Thomas being interviewed by RNZ’s Barry Crump>

Health is the fastest growing area of employment in Canterbury, with nearly 7,500 new jobs being created over the past few years. As our population grows, so does the need for health workers. There are a huge variety of jobs in health – and it doesn’t always mean working in a hospital.

Canterbury has some world-leading health businesses including Taska (which produces the world’s most advanced prosthetic hand), Medsalv (reducing waste in the healthcare industry by working with hospitals to reuse single-use medical devices) and Enztec (manufactures orthopaedic instruments for implant companies and orthopaedic surgeons worldwide).

The growing health sector requires a strong manufacturing, professional, scientific and technical services and health care and social assistance workforce. Some of the areas you can work in include:

Find out more about our health sector here

Enrolments for courses opened Monday 2 November (earlier this week). Students who have fast track/firm offers will be allowed to enrol.  If students have been requested by the University to provide certified copies of their Identification documents etc, they will need to provide these to AskAuckland before they will be allowed to enrol. They can either bring it to AskAuckland in person or courier their certified copies.

The University website has great guides on the enrolment process:

How to enrol using Timetable Planner:

They can use Timetable Planner to enrol in the selected classes determined for their programme. They will receive information about which cohort to select via email, after they have accepted their offer of admission.